The Ivory Tower receives an award

After persistently posting philosohical comments on obscure subjects, and taking positions people have long-since discredited or abandoned, this blog has the great honor to be the recipient of the Arte y Pico award for noteworthy blogging, conferred by Kevin Grieves at The Modern Historian. I would like to extend my thanks to Kevin, and to the originator of the award at the Arte y Pico blog 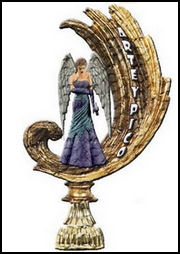 Recipients of the award have the option to pass on the award to other blogs they find worthy of special attention.

Each award has to have the name of the author and also a link to his or her blog to be visited by everyone.

Each award winner has to show the award and put the name and link to the blog that has given her or him the award itself.

The recipient and the one who has given the prize have to show the link of “Arte y Pico” blog, so everyone will know the origin of this award: http://arteypico.blogspot.com/

The following blogs have earned my commendation.

A Brood Comb by Tanasije Gjorgosky. Tanas has built an extensive blog about philosophy and provides an impressive array of philosophy resources on the web including videos and interviews. His work is a credit to amateur philosophy and I constantly refer to his resources page.

Growing Fins by Nin Harris. Nin is studying literature. Her blog offers book reviews and original writing. Visiting the blog is a literary experience in itself.

Born in Michigan, USA, in 1948, I've since lived all over the US, but back here again. I've worked as operating systems developer, consultant, and published three books on Unix and programming back in the 90's. My interests include philosophy and cooking chili. I can usually be found online in the mornings, on Undernet, chatting with people in the #Philosophical channel.
View all posts by John Valley →
This entry was posted in Uncategorized. Bookmark the permalink.

1 Response to The Ivory Tower receives an award